Although her own cause took precedence, Clara Barton passionately defended her friend, the well-known suffragist Susan B. Anthony. She once hosted a reception for 400 feminists at her Glen Echo home in 1904, staunchly standing beside her fellow Massachusetts native in support of her cause.

“Soldiers, you have called me here to speak to you of the war we lived together. I have done it. Now I have a word to you. I wish to read to you this paragraph which you have used to help fill your hall….

‘We can promise our citizens a rare treat of patriotic eloquence, such as is seldom listened to, and we can assure them that there will be no cause for disappointment; they will not have thrust upon them a lecture about women’s rights after the style of Susan B. Anthony and her clique. Miss Barton does not belong to that class of woman.’ That paragraph, my comrades, does worse than misrepresent me as a woman; it maligns my friend. It abuses the highest and bravest work ever done in this land for either you or me. You glorify the women who made their way to the front to reach you in your misery, and nursed you back to life. You called us angels. Who opened the way for women to go, and made it possible? Who but that detested clique who through years of opposition, toil and pain had openly claimed that women had rights and should have the privilege to exercise them — the right to her own property, her own children, her own home, her just individual claim before the law, to her freedom of action, to her personal liberty.” 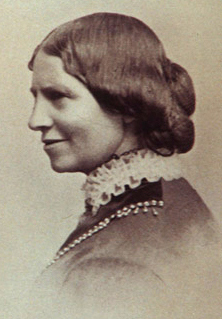 “Upon this, other women claimed the right and took the courage, if only to go to an army camp and drag the wounded men out of a trench and try to save them for their families, their country. And, soldiers, for every woman’s hand that ever cooled your fevered brow, stanched your bleeding wounds, gave food to your famishing bodies, or water to your parching lips, you should bless God for Susan B. Anthony, Elizabeth Cady Stanton, Frances D. Gage and their followers. No one has stood so unhelped, unprotected, so maligned as Susan B. Anthony, no one deserves so well, and, soldiers, I would have the first monument that is ever erected to any woman in this country reared to her; and that monument will be reared, and your daughters and boys will help proudly, gratefully help to set its granite blocks like glistening silver, for everlasting. Aye, set it where all may see and I would recall the eloquence of Webster at Bunker Hill: ‘Let the earliest light of the morning gild it, and parting day linger and play on its summit.’ Boys, three cheers for Susan B. Anthony!”

Kids:
Clara Barton (1821-1912) saw many changes in society during her long lifetime. Did she ever cast a vote for president, governor, city councilor or school committee member?