What were her favorite colors?
Clara loved the colors red and green.

Did Clara ever marry? Did she have children?
Clara Barton never married or had children. She had several nieces and nephews on whom she lavished her attention. 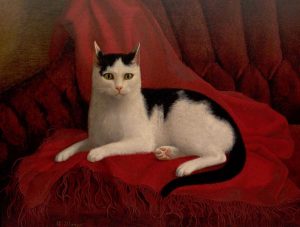 What did Clara like to do in her spare time?
David Barton taught his youngest sister to ride a horse, a skill she loved and enjoyed throughout her long life.

Did Clara have any pets?

Yes, Clara loved pets. She named her first dog Button. In her later years she developed a special fondness for felines. A painting of her cat Tommy (right) hangs in the dining room of her home at Glen Echo, Maryland, now the Clara Barton National Historic Site.

See if you can find the hidden words
about Clara Barton: 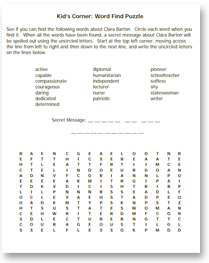