“To this day, I would rather stand behind the lines of artillery at Antietam or cross the pontoon bridge under fire at Fredericksburg, than to be expected to preside at a public meeting.”

As the war drew to a close, Clara was flooded with letters from families of missing soldiers. Grieving relatives pleaded to know if Clara had nursed their sons, husbands, or brothers. President Lincoln, recognizing the depth of her commitment, appointed Clara Barton to lead the search for missing soldiers.

To promote the work to locate thousands of missing men, Clara embarked on an extensive lecture tour throughout the Northeast and parts of the Midwest. She captivated audiences with vivid tales of her wartime experiences, giving some 300 lectures before losing her voice during a speech in 1868.

Clara submitted a report to Congress including the numbers of inquiries received, circulars printed, and letters written and sent, along with a list of her direct expenditures. On March 10, 1866, Congress approved $15,000 to reimburse her expenses for the work. Her search concluded at the end of 1866 with over 22,000 men identified. The 1869 Senate Memorial of Clara Barton contains text from her final report describing methods she used to search for the missing men.

The leaflet below is from the Senate records, “40th Congress, 3d Session.” “Mis. Doc. No. 57.” It is Clara Barton’s report to Congress at the close of her Office of Correspondence with the Friends of the Missing Men of the United States Army.  She was trying to have the Government declare additional Missing Soldiers dead in order for the families to receive compensation.
Source: Clara Barton National Historic Site, CLBA 46 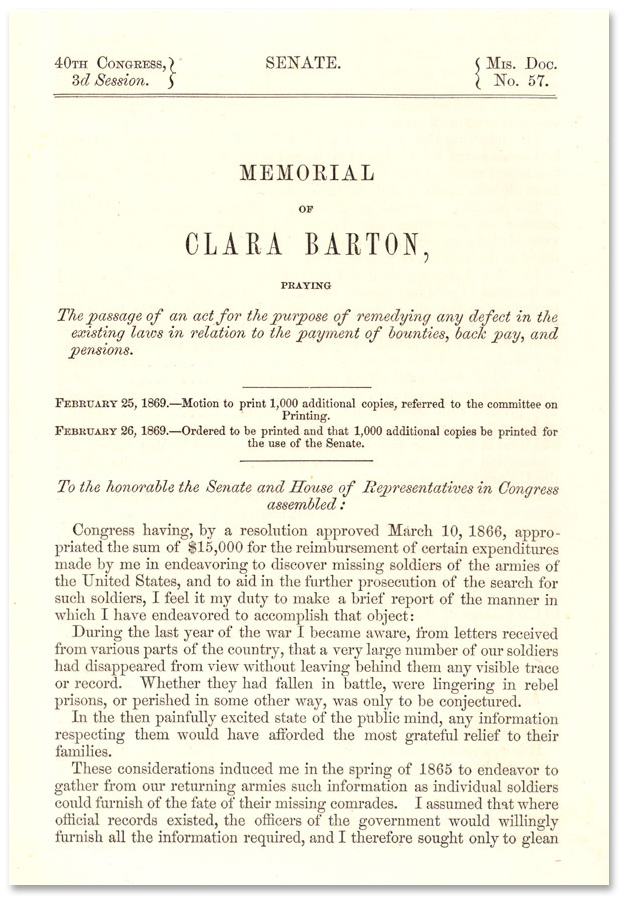